The 3S AIG XS is designed as a handy valve maintenance device and completes the product range of 3S actuators. It is with 5.5 kg much lighter and smaller than its predecessor, the 3S AIG and is offered in three versions with a peak output of up to 900 Nm. As a one-man device, it is ideal for the needs of medium and small size network operators. Torques of up to 1,800 Nm can be achieved with the 3S load amplifier.

Just like the more powerful 3S AIG, it impresses with its innovative digital electronics, which make it into much more than a simple valve exerciser. Current valve conditions can be captured and plotted as a torque curve, which also shows number of gears turned. Condition-based valve maintenance can therefore be realized.

The System Berliner Kappe® makes it significantly easier to operate buried valves. It makes it possible for just one individual staff member to operate even large and extremely hard-to-operate valves – without requiring physical effort.

The Berliner Kappe® is a patented coupling solution developed by the Berliner Wasserbetriebe and AVK Plastics BV for the mobile actuator 3S AIG. Covered by a standard street cap, a mount is installed on a supporting plate for valve stem caps which is anchored in the ground so that it doesn’t rotate when operating the valve. The valve can still be operated manually with a valve wrench. 3S AIGcan also be used as a valve turner. The rotationally locked and grounded support plate under a standard street cap absorbs the occurring counter-torque. The usual operation by means of a slide key remains possible.

All in all, the advantages of using the System Berliner Kappe® are as follows:

More information can be found here:

The AIS is a PC maintenance software that is used to evaluate the measured condition data using a uniform system. Also, this software is intended to serve paperless documentation and mobilize access to GIS data.

Our AIS software is integrated via the GIS provider Lovion and coupled via the Lovion TASK. Via Lovion 3S Connect, the valve is communicated to the AIG from Lovion TASK via Bluetooth and the measurement data of the maintenance including the "3S status light" are then automatically transferred to Lovion TASK.

it is precisely this evaluation of the measured valve state data that the 3S AIS takes on: It assigns the valve a traffic light color based on the condition data measured by the 3S AIG in accordance with the above-mentioned classification and prepares the measured data from the 3S AIG graphically in the form of a path-torque curve (Fig 1). 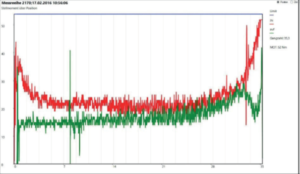